A Finn in the Philippine-American War

After the Spanish-American War ended on August 8, 1898, the U.S. found itself in another war in the Philippines.  The Philippine-American War, a.k.a. the Philippine War of Independence, started after the U.S.’s control over the Philippines did not sit well with President Emilio Aguinaldo. The President wanted independence.  This new war created an opportunity for a few newly arrived U.S. Finnish immigrants.

In September 1899, Mathien Mikkula, Herman Pattu, and John Lappi, recent immigrants to Minnesota, saw an opportunity to fast track their U.S. citizenship.  Military service by immigrants, especially during time of war, meant U.S. citizenship upon release of service.  The three men enlisted into the Forty-Fifth U.S. Volunteer Infantry out of Fort Snelling, Minnesota.  Fort Snelling was also home of the 25th Infantry Regiment, better known as the Buffalo Soldiers.  Both units would depart for the Philippines later that year. 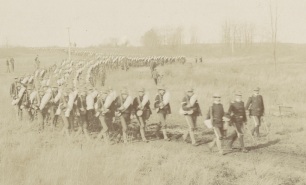 The Forty-Fifth arrived in the Philippines’s capital of Manila in December 1899 with five officers and 191 enlisted men as part of a group of 459 officers and 12,201 enlisted men.   The 45th was immediately sent to engage the enemy.  They did so near Montalban along the Mariquina River.

They conducted operations mostly south of Manila in Cavite and Batangas and was briefly based at Naic in January, 1900.  In February, the 45th sailed to the Camarines, south of Manila.  They entered Nueva Caceres to find the town had been abandoned by its citizens.   They continued their mission to take over several ports in the area.

In April 1900, Mathien contracted Typhoid Fever and passed away. His death was reported by Lt General – Arthur MacArthur, Jr., Father of Douglas MacArthur.   The war officially lasted another year.  President Aguinaldo swore allegiance to the United States on April 19, 1901.  The 45th returned to San Francisco May 17th, 1901, and the division was released from military service on June 3rd.  Herman Pattu, John Lappi, and Mathien Mikkula (posthumously) became U.S. citizens.